The brief was to create an original and unique, functional cafe, restaurant and bar to serve the Arrivals traffic in Shannon Airport. The location in the airport meant the design would have to have an immediate impact from 4 main routes: outside the airport, the main arrivals entrance to the airport, from the check in desks and also from the flight arrivals zone. 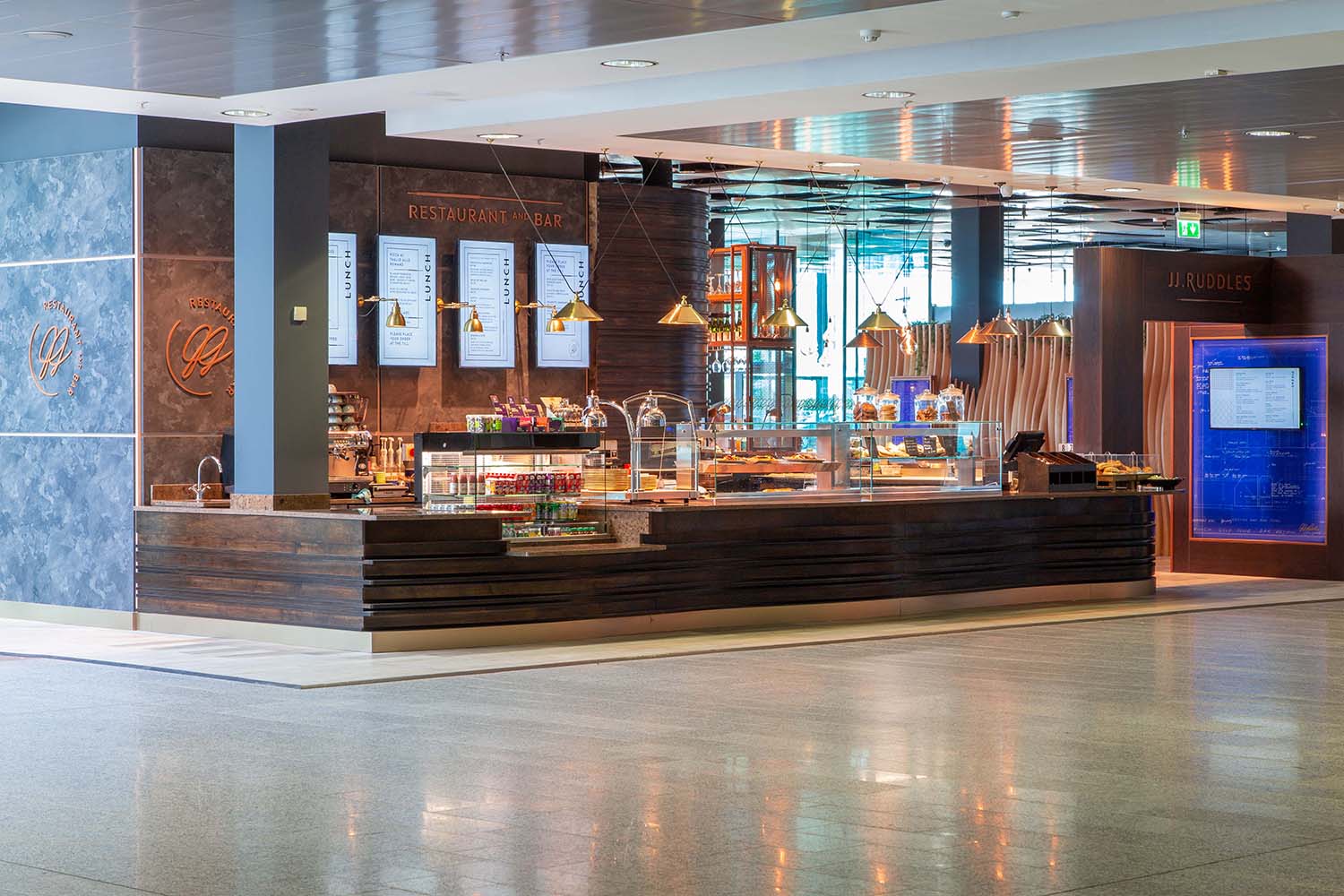 The most challenging factor in the design process was to create a space that could transform throughout the day seamlessly from a morning and daytime café into a destination evening restaurant & bar, operational hours being 5am to 11pm.  In addition to this, both the client and the Airport were keen to attract clientele from outside the airport in the nearing town and businesses from the Shannon Free Zone Industrial estate. In effect, create a destination restaurant and in doing so drive even more foot-fall through the Airport. 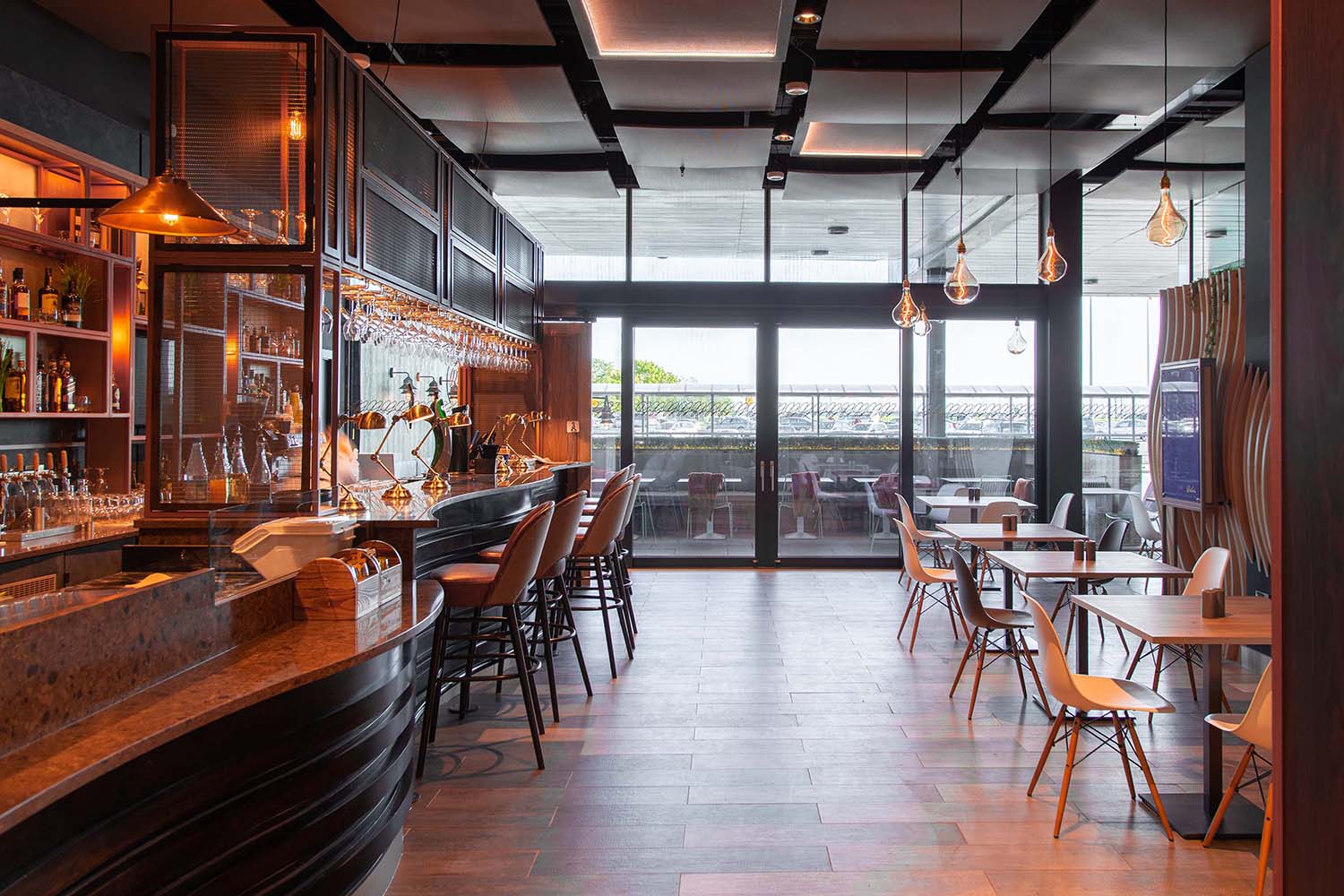 As the café/restaurant needed to be multifunctional throughout the day, huge emphasis was placed on space planning in terms of both scaling and intimacy with lighting playing an imperative role. The front façade of the airport was opened to incorporate sliding glass screens allowing the cafe to move outside and create an external seated courtyard. The layout incorporated a central, more intimate space with adjacent secondary zones for busier times.

The client Zest named the restaurant after JJ Ruddle, an architect who worked on the original Airport design, and wanted to incorporate his story into the design. The Airport wanted to tie in that concept with their own overall theme for the entire Airport masterplan: ‘Sense of Place’. As a result, the Wild Atlantic Way would play a key role in influencing the overall design.

Incorporating the Wild Atlantic Coastline into the concept meant the introduction of ideas such as cliff formations, water, movement, texture and colour.

The design elements are based on the fluidity and movement of water and layering of our cliff lines, all juxtaposed and intermixed with heavily engineered details and materials of the architectural world.

The colour palette of the scheme includes slates, rusty and dark browns of our cliff formations. The floor tiles fluctuate from sandy browns to the blue hues of our beaches. Dramatic blues of the Atlantic Ocean are used to form the backdrop to the story of JJ Ruddle in large layered blueprint light boxes.

Lighting plays a key element in allowing the space to transition throughout the day. Bespoke ceiling led lights set in amongst suspended layered bronze mesh panels are complimented by larged Vertigo pendants of 2m wingspan. Intermixed throughout are suspended organic shaped led light bulbs all adding to overall drama and ambience of the space.

The overall result is an environment that fuses the essence of our coastal features into architectural details, telling the story of JJ Ruddle and giving the visitors through the airport a first or last taste of the West of Ireland. 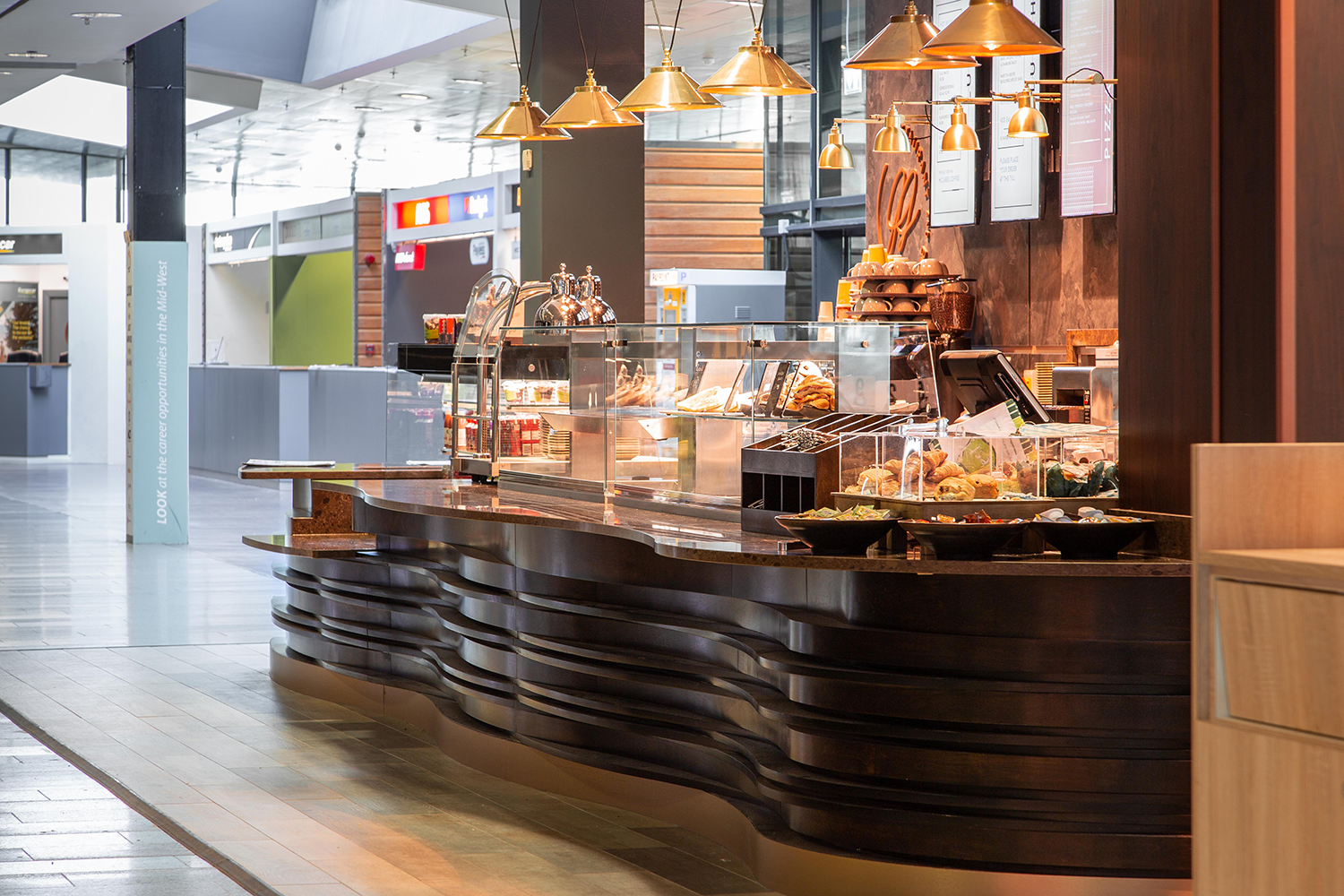 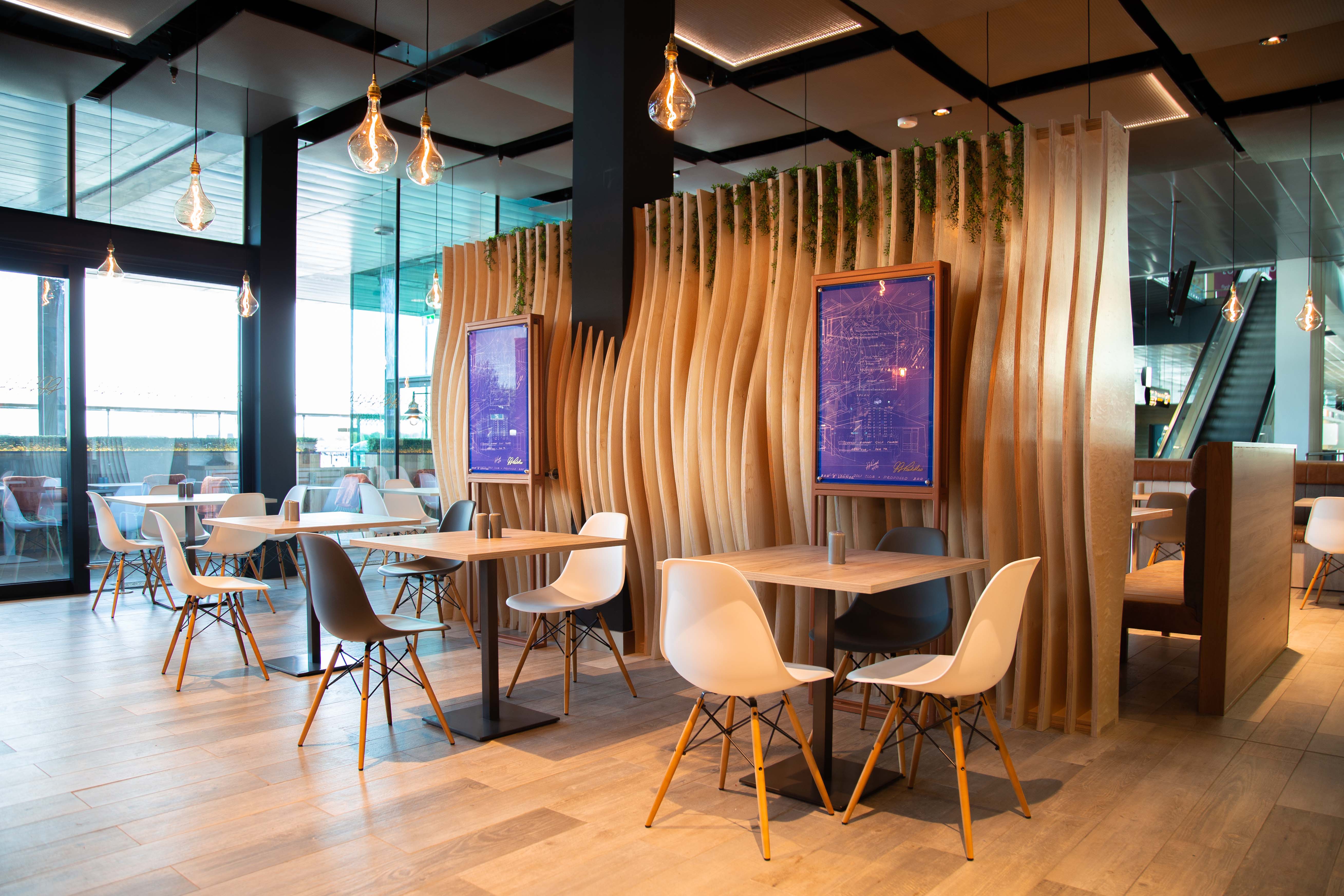 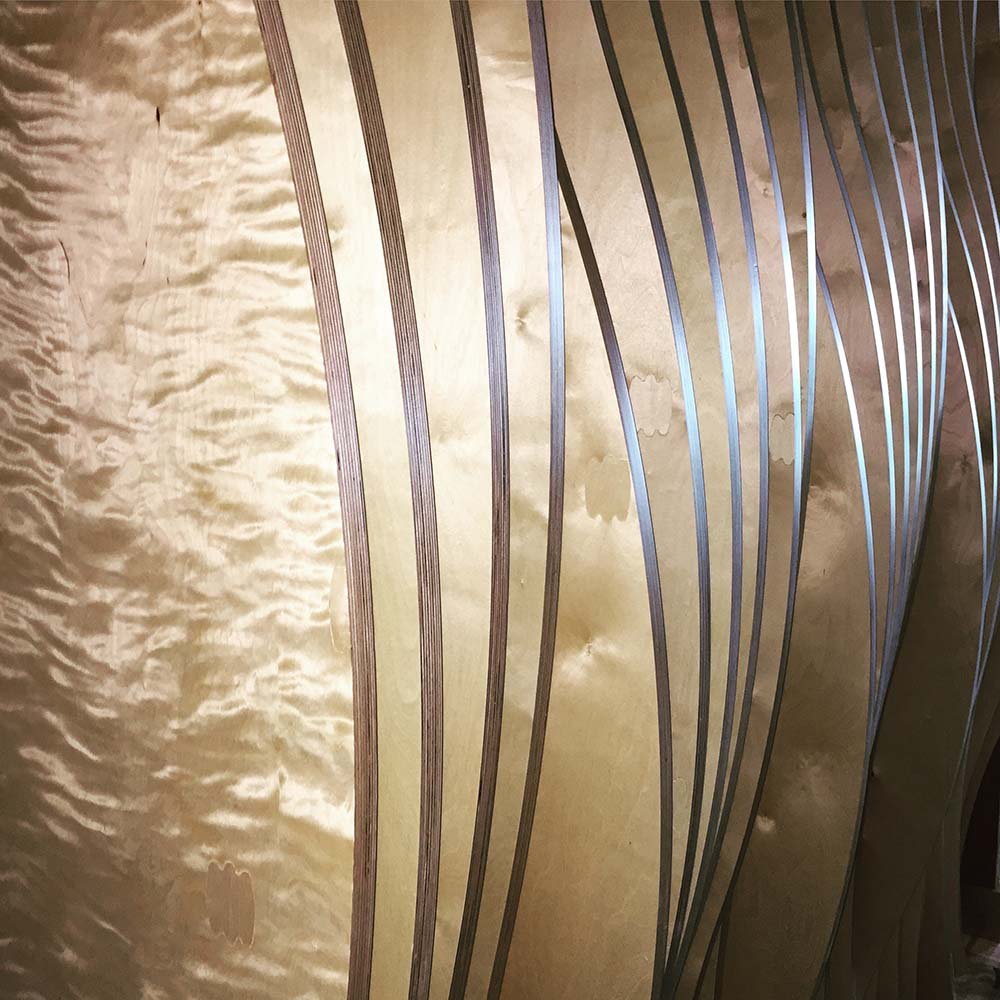 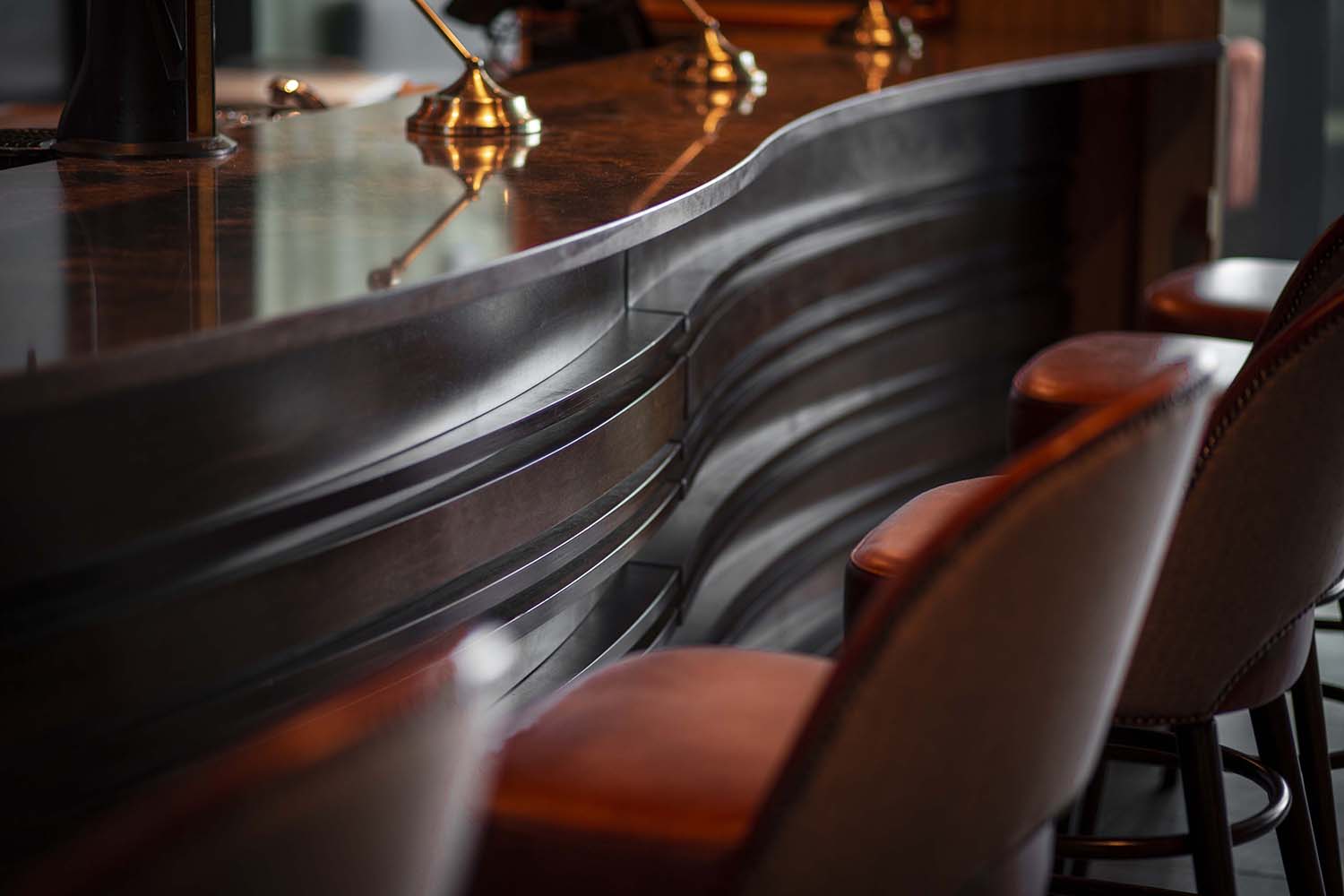 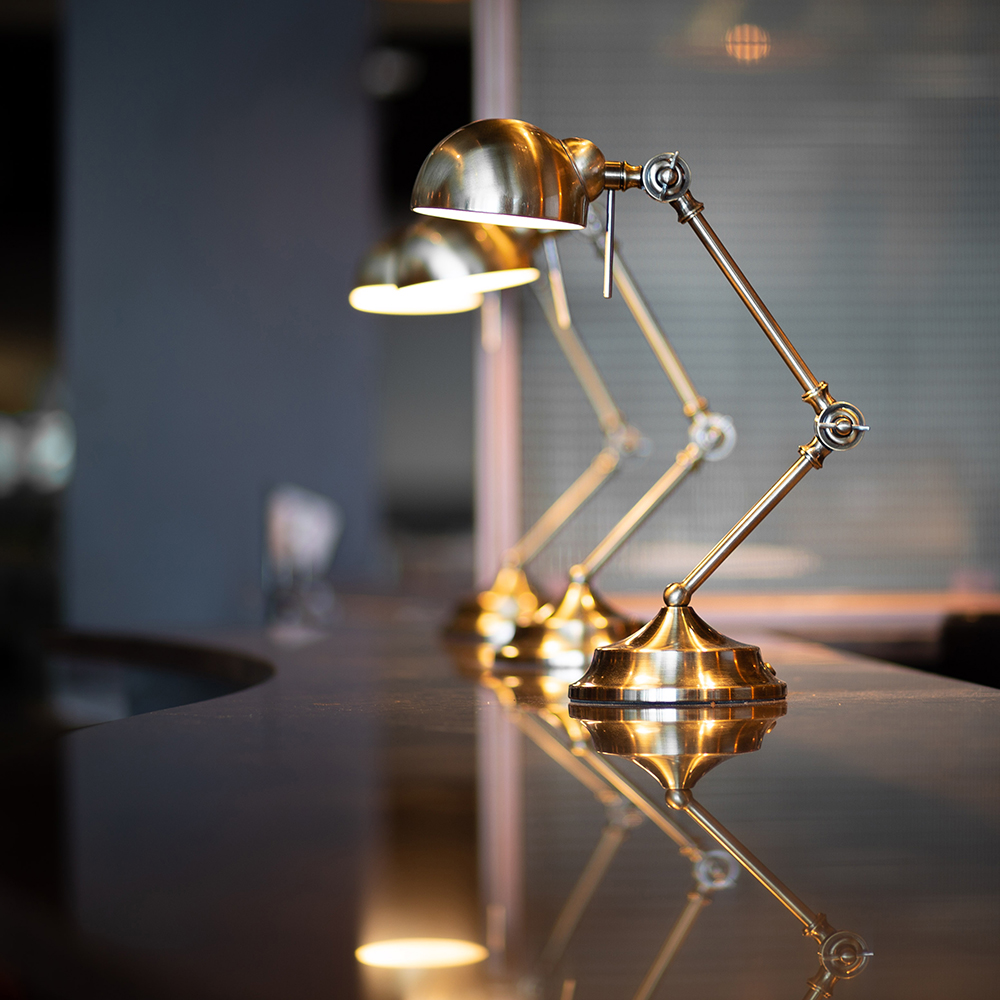 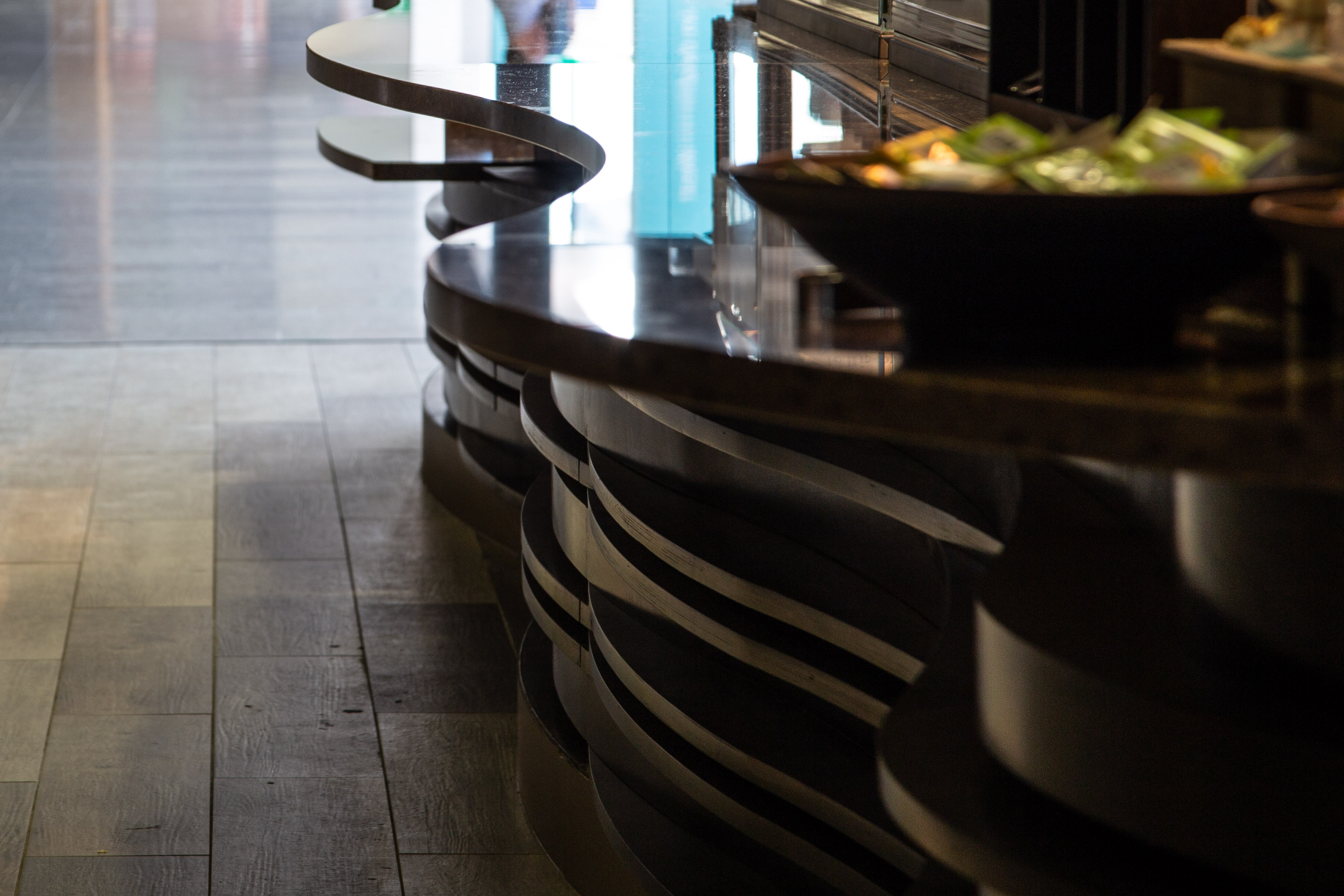 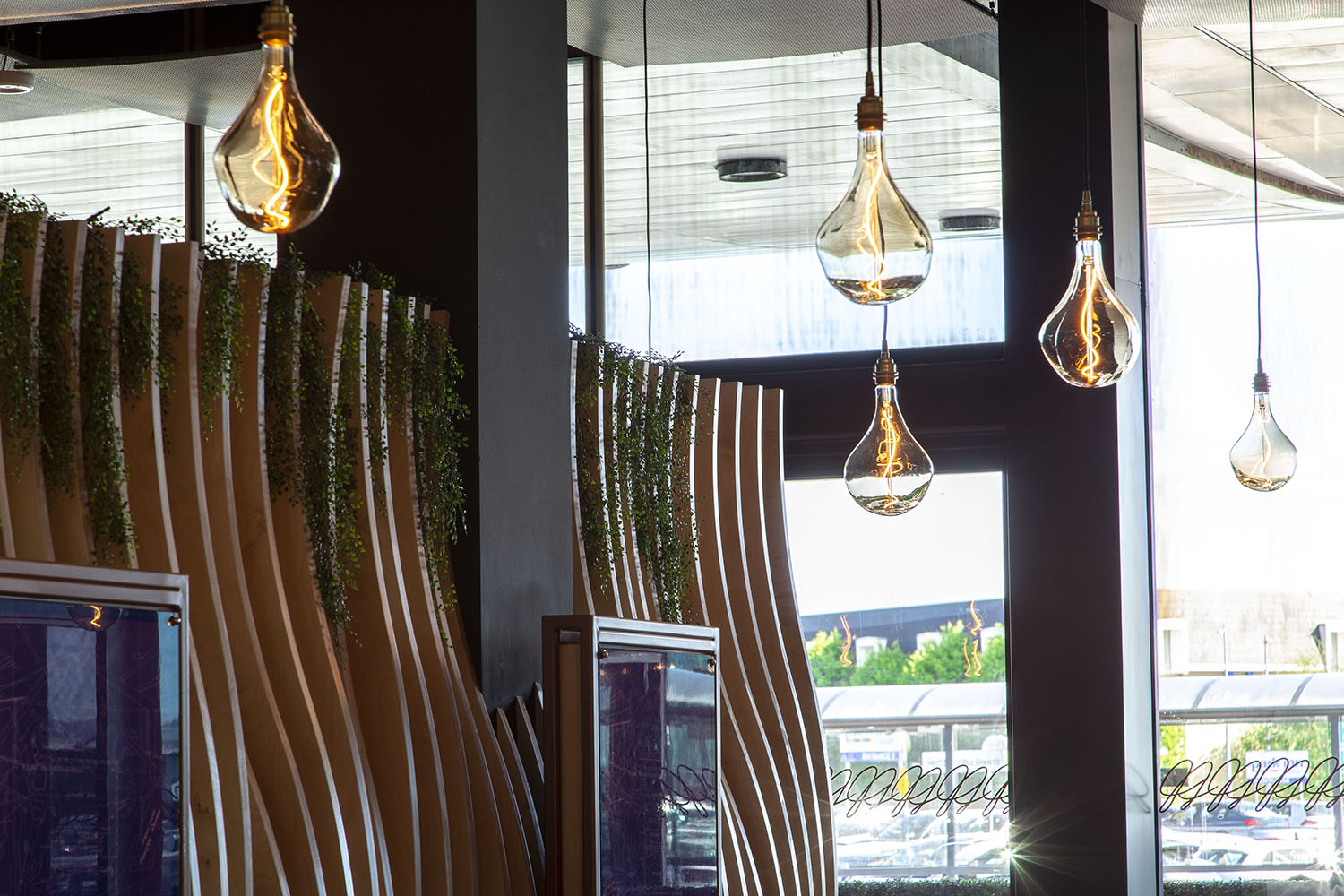 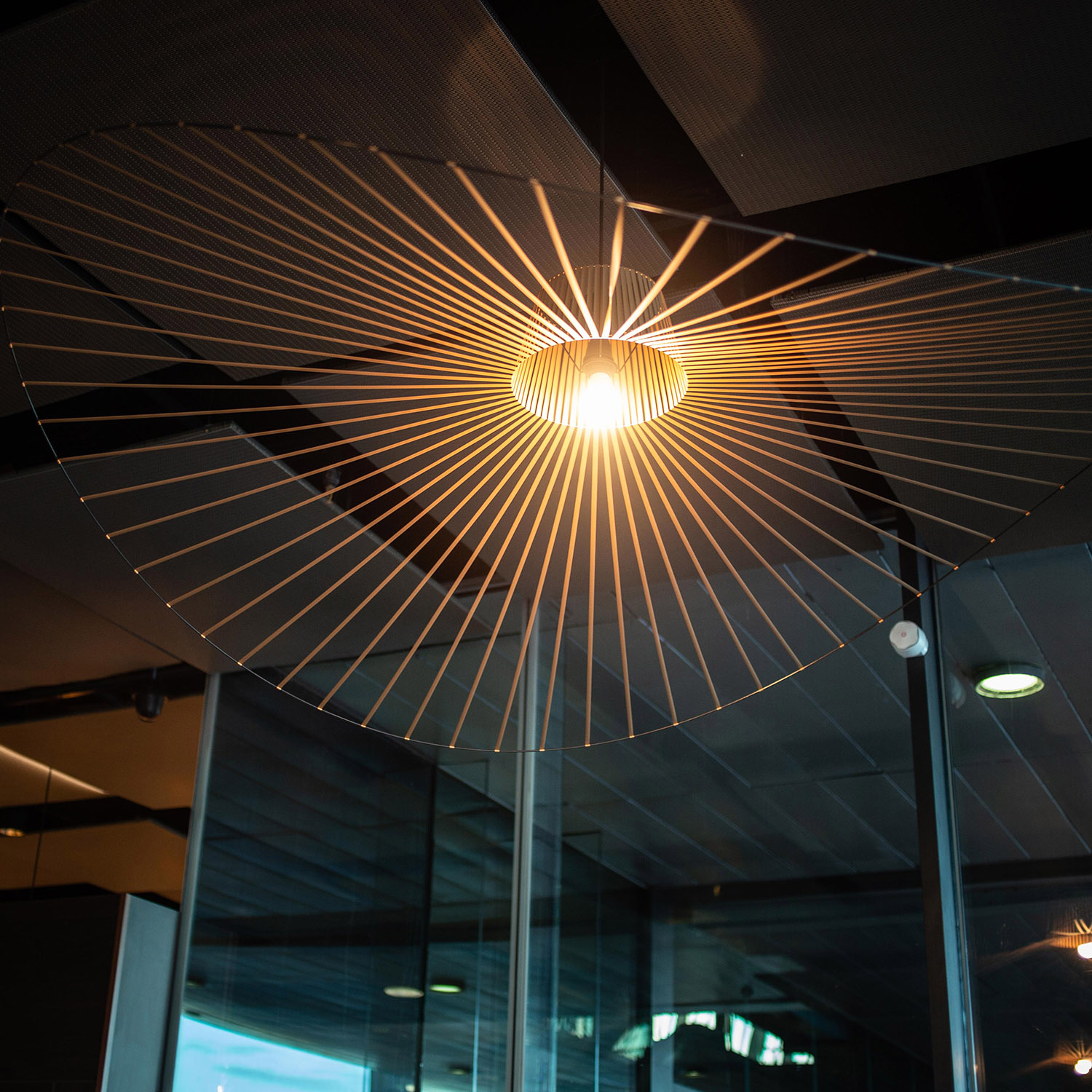 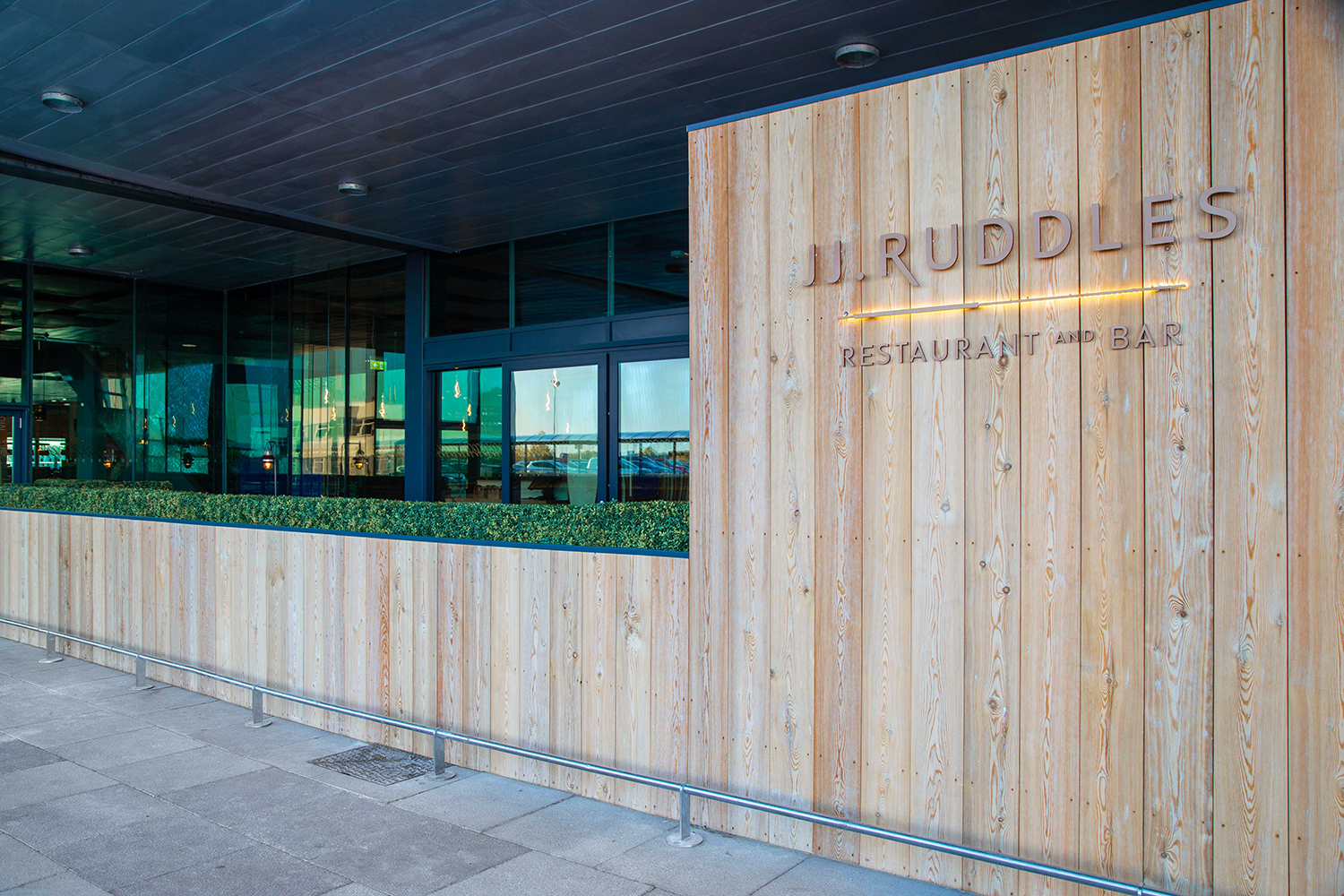